LOGIN
SHIP TOKOREA, REPUBLIC OF (EUR) / English
FREE SHIPPING OVER 300 €
Designed & Crafted in Italy
PLEASE SELECT YOUR LOCATION
Kindly note that, switching the country while shopping, you will lose the products in your cart.
FOR ALL OTHER COUNTRIES 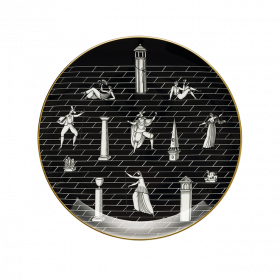 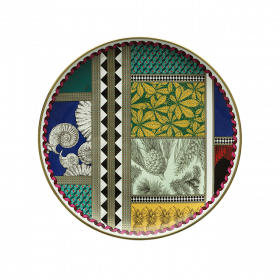 In this decoration, Giò Ponti revived the classical inspiration of the Manufactory, evoking the 18th century tastes of travellers on the Grand Tour; but it also presumably refers to the itinerary around the excavations in Rome, inaugurated in 1918 and known as the Archaeological Stroll. The illustration, which forms a pair with La Conversazione Classica (The Classical Conversation), made its début on the occasion of the Monza Biennale in 1923, but it was only in 1924 that it began to be applied for decorating plates. The decoration matches the Attività Gentili (Noble Activities) of the same period, showing figures that find their spatial dimension thanks to the perspective provided by the tiled floor on which they are moving. They are arranged at symmetrical intervals, divided by architectural elements reminiscent of classical art, hence the name. The Richard Ginori Manufactory is now offering this decoration in both versions designed by Ponti, on a white background and on a black background; these are still being made with the decal technique using a single application. The example on a white background, in particular, highlights the Manufactorys creative skills, since it consists of two decals that must be perfectly superimposed in order to create the gold highlights on the dark blue silhouettes as well as on the tiling. After firing the decal, the gold is applied on the edge with a brush for both types of decoration.